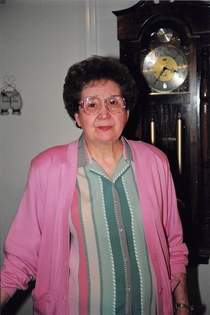 Ms. Bernice Celeste Stephens of Whitley City, Kentucky, departed this life on Sunday, November 30, 2014 at the McCreary County Health and Rehab Center being 93 years, 8 months and 20 days old, she was born in Whitley City, Kentucky on March 10, 1921 daughter of the late Ervin Clark and Margaret Isabell (Stephens) Clark.

Bernice had been a cook and custodian in the McCreary County School system. She was a member of the Whitley City, Church of God; she enjoyed cooking and attending church functions, and enjoyed babysitting her niece.

She is preceded in death by her husband Matthew Stephens whom she was married to for twenty years, daughter and son-in-law Margret Sue and Edward Smith, three brothers; George, Garrison, and Bill Clark, three sisters; Glenna Bell, Gladys Shepherd, Frieda Frost.

To order memorial trees or send flowers to the family in memory of Bernice C Stephens , please visit our flower store.