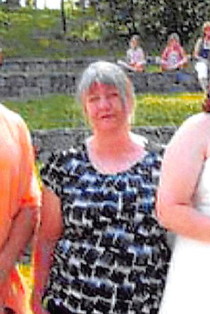 Nonnie Carolyn â€œCarolâ€ Taheny, 61, of Parkers Lake, KY, passed away on February 6th 2014 with her family by her side after a short battle with lung cancer.  She was born to the late Oakley â€œGirdenâ€ and Milda â€œMaeâ€ Taylor on August 29th 1952 in Sawyer, KY.  She is survived by her five children: Michael Taheny, 41, of Athens, AL, Bonnie DeNormandie, 39, of Clarksville, TN, Jay Taheny, 35, of Richmond, KY, Jackie Taheny, 30, of Parkers Lake, KY and Randall â€œLouieâ€ Taheny, 25, also of Parkers Lake KY.  She is also survived by nine grandchildren and her sister Shirley Rollins, 66, of Parkers Lake, KY.   She was preceded in death by her parents, older brothers Lee and Homer Taylor, and two infant brothers.
Carol was a very strong-willed, resourceful, and independent woman.   As a single mother, she prided herself on the fact that she was able to raise all five children on her own and instill in them the values and work ethic that would prepare them for all of lifeâ€™s challenges.  She had a very compassionate heart and would oftentimes go out of her way to help those in need.  She was very gifted artistically and had an uncanny sense of humor that could make light of any situation.
Carol was laid to rest at Mill Creek Cemetery on February 9th 2014.  Her crowning achievement in life was that she was able to do so much with so little.  All of her children have gone on to become successful in their own right and that is a testament to her.  She did what she was sent here to do and she did it very well.  As she left this world, she was surrounded by her family and the last words she heard were perhaps the most comforting of all.  â€œYou did good, mom.  You did good.â€  Now please join all of us in carrying out her final wish and â€œGo enjoy life.â€  May she now rest in peace.

To order memorial trees or send flowers to the family in memory of CAROL TAHENY, please visit our flower store.