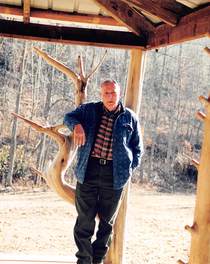 Foist Perry of Whitley City; Kentucky departed this life at the McCreary County Health and Rehab Center in Pine Knot, Kentucky on September 1, 2014 being 81 years, 8 months, 13 days old.  He was born in McCreary County, Kentucky on December 19, 1932 the late son of Claymon and Allie (Bryant) Perry.

He was a carpenter and of the Baptist faith.

Along with his parents he is preceded in death by two great grandchildren Abby Faith Wyatt and Sharada Leshea Douglas, and one sister; Sylvia Hinkle.

Funeral Services for Mr. Foist Perry will be conducted Thursday, September 4, 2014 at 2:00 PM at the McCreary County Funeral Home with Bro. Clay Cook and Bro. Hurstle Daugherty officiating. Burial will follow in the Barren Fork Cemetery.

To order memorial trees or send flowers to the family in memory of Foist Perry , please visit our flower store.