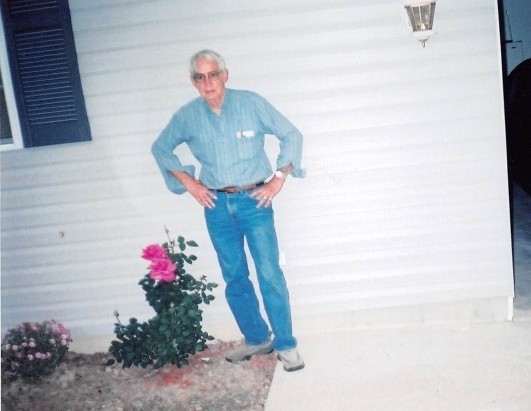 World War II Navy Veteran Kelsie Meadows passed away at his home in Parkers Lake, KY, on June 26, 2015. He was 91 years old and survived by his wife Geneva Terry Meadows and six (6) children: Harvey Meadows and his wife Donna Meadows; David Meadows; Linda Meadows Huckaby and her husband Bob Huckaby; Joe Meadows and his wife Jan Meadows; Ronnie Meadows; and Darlene Meadows Price and her husband Austin Price. Kelsie was also survived by four (4) stepchildren: Lois and Roger Burton; Robin and Maggie Carrington; Jane Bailey; and Bill Carrington. Kelsie was survived by his brother Charles (CC) Meadows. Additionally, Kelsie was survived by nineteen (19) grandchildren and twenty (20) great grandchildren, and a very special nephew Johnny Meadows.  Kelsie was preceded in death by nine (9) brothers and sisters. Kelsie’s parents were the late Lewis and Jane Meadows of McCreary County Kentucky. At the age of 16 years old Kelsie joined the Civilian Conservation Corps (Three Cs) which assisted in the building of many parks and important structures which are now known to McCreary County today as historical markers. Kelsie then joined the Navy at 17 years old and after his training was sent to the notorious “Battle of Guadalcanal” where he was a part of amphibious assault teams on the enemy. After Kelsie’s honorable discharge from the Navy, he worked in his parent’s store in Cincinnati, Ohio where he met his first wife, the late LaJoy Meadows. Together, Kelsie and Joy survived the “Great Depression” and managed to raise six (6) kids while operating a store in Cincinnati, Ohio, then later in McCreary County, Kentucky.  Kelsie also rose to the degree of Master Mason in the Masonic Lodge. Kelsie was a small business owner for more than 30 years in Cincinnati and McCreary County. He then spent nineteen (19) years as a counselor for the McCreary County Job Corps. It was during this time frame that his loving wife Joy deceased, and Kelsie would meet and marry Geneva Terry Meadows.

The funeral will be officiated by Brother Rufus Hughes and Brother Daniel Ridener. Veteran Thomas Corder of the McCreary Post Veterans of Foreign Wars (VFW) will honor Kelsie as a WWII Veteran. Both the VFW and the American Legion Post 115 will perform a Veteran ceremony. Services will be held at the McCreary County Funeral Home on Monday June 29th, 2015, at 4 p.m., for family and 6 p.m. for guest. Interment will follow on Tuesday June 30th at Noon, at the Keith Morrow Cemetery. There will be a second grave-side memorial service on July 6th, at 6:00pm, for the family members and friends who were unable to attend the above services.

To order memorial trees or send flowers to the family in memory of Kelsie Meadows, please visit our flower store.