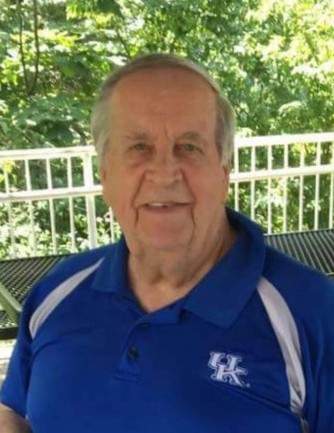 “Hello, I’m Larry Morgan and I’m a Church of God Christian.”  This is the greeting received by many many people upon meeting Larry Andrew Morgan.

Larry Andrew Morgan, 83, left this world October 27, 2018; he entered those pearly gates of heaven at 2:05.  Larry lived his entire life with this one moment in mind—to meet his heavenly father and be reunited with loved ones gone before him.  Some of those include his parents, Reverend Oscar and Cevil Morgan who gave him life on July 14, 1935; his devoted wife and the mother of his 8 children, Toni Vee Craig Morgan whom he married on February 6, 1960; his daughter Sarah Amelia Morgan; his brother Ralph Morgan; nephew Timothy Smith; great grand-daughter Kylee Ladonn Strunk, and numerous cousins, grandparents and friends.

Larry followed in his father’s footsteps and was an insurance salesman for Life & Casualty for 25 years.  He left there and worked with the Ross-Shepherd Insurance Agency for numerous years, and then went back to Life & Casualty where he retired from in 1997. As in insurance salesman, he made 1,000s of friends, many of whom treated him like family.  He has sat down at the dinner table with countless people in McCreary County, as well as Scott County, Tn.  Larry and his wife also owned a couple businesses in the 80’s, such as a game room and most notably Uncle Roy’s Chicken.  After ‘retirement’, Larry worked at LeSportsac, Gregory’s Sawmill, and delivered newspapers for the McCreary County Record (13 years).

Larry was a devoted Christian and lived a life that he hoped would always portray Godly love to everyone he met.  He was a member of East Stearns … in his recent years in McCreary County, he had attended Whitley City Church of God; but he always considered his ‘home’ church to be East Pine Knot Tabernacle.  He also attended Hayes Creek Church of God, where his father pastored, for several years.    Larry LOVED to sing about the Lord, and was a member of the Hayes Creek Quartet.

Larry A Morgan will be laid to rest alongside his wife and parents at T Chitwood Cemetery in Pine Knot, Ky.  Visitation will be Monday from 6-9 at McCreary County Funeral Home; funeral services Tuesday, October 30, 2018 at 12 at East Pine Knot Tabernacle. Reverend Bruce Dixon and William Kilby officiating.

As Larry would say, “May the good Lord bless you.”

To order memorial trees or send flowers to the family in memory of Larry Andrew Morgan, please visit our flower store.