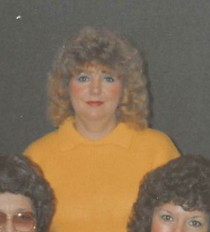 
Linda Kaye Roberts Queen passed away suddenly on July 13, 2014 at her home in Revelo, Kentucky. She was the daughter of Roy and Kathryn Roberts. Granddaughter of Fred and Edith Wilson Ballou, also deceased.

Linda was married to Gary Queen in December 1968. She was preceded in death by her parents Roy and Kathryn Roberts, husband; Gary Queen, Sister; Pauline Stephens. She is survived by one son, Michael Queen and wife Mona of Robbins Tennessee, one daughter Melissa Burke and husband Shawn of Pine Knot, Kentucky. Also to mourn her passing is two sisters Norma Ross and Rama Wilson both of Revelo, Kentucky.

Mrs. Queen is also survived by five grand children: Garra Queen, a special granddaughter of whom she raised and held special in her heart. Gary Queen, Tammy Bruke; Alexis Burke; and Michael Burke; also survived by 6 nieces and nephews.

She was a member of the Day Ridge Church of God. Our loss is her gain in heaven.  Linda was employed by the Adanta Group Division of child care and later worked for the State of Kentucky in Human Services for a combined time of seventeen years.  Linda was a licensed practical nurse having worked at the Scott County Hospital and Nursing Home. She will be laid to rest in the Pine Knot Cemetery in Pine Knot Kentucky.

To order memorial trees or send flowers to the family in memory of LINDA KAYE QUEEN, please visit our flower store.