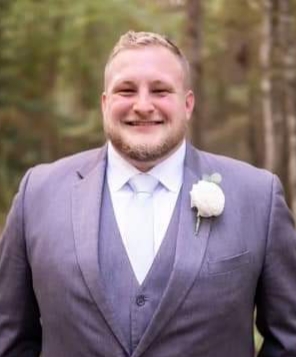 Houston Byrd, affectionately called "Byrdi" by friends, passed away Thursday, December 10, 2020 at his home. Houston was born December 17, 1994 in Oak Ridge Tennessee. He was the son of Mark E Byrd and Trina Lawson Byrd.

Houston was a graduate of Oneida High School class of 2013, received his BS degree from Tennessee Tech University in 2020 and was employed by the Oneida Special School District as a Special Education teacher at Oneida Middle School. He was a member of the Bethlehem Baptist Church. Houston was a football player at Oneida all of his middle and high school years.  He enjoyed boating, golfing, travel, and was also the biggest LSU fan around and proud of it. To know him was to love him. He was a protector, a mentor, and a great friend.

Houston is survived by his daughter Marklee Mae Byrd, who was the true love and light of his life; his parents Mark and Trina Byrd; sisters Ashton and Triston Byrd; grandparents Eugene and Mary Byrd & Earshel Lawson and Bonnie Blevins; and uncle Dale Byrd. Houston also leaves behind too many friends to list, his students that he had grown so fond of, Paige Cooper who has been like a sister, and Bob the cat who has been his companion for 7 years.

Friends may visit with the Byrd family on Tuesday, December 15, 2020 from 5 p.m. until time of the funeral service at 8 p.m. at the Bethlehem Baptist Church with Heath Sexton, Josh Sharp and Bro. Delyn Phillips officiating. Music will be provided by Ashton Byrd, Dallas West and Marcy Thomas.

In-Lieu-of flowers the family requests donations be made to:

With the Health Guidelines in place at this time, we ask that you be mindful of the social distancing measures recommended by the Centers for Disease Control. Masks are required.

To order memorial trees or send flowers to the family in memory of Marcus "Houston" Byrd, please visit our flower store.