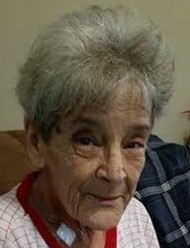 Born in McCreary County, Kentucky, on August 8, 1940, she was the daughter of the late Gerome and Nellie (Bryant) Sumner.  Besides her parents, she is preceded in death by two children: Debbie and Tony Tucker, a grandchild Kiley and a great grandchild Brittany Chitwood, Three sisters: Minnie New, Mary Murphy,and Reba Sumner, one brother Donnie Sumner.

Myrtle had been a cook at the Whitley City Motel and at the DuPont Lodge at Cumberland Falls.  She enjoyed cooking for her family and spending time with her grandchildren.

Visitation:  Monday from 12 noon until time for services

To order memorial trees or send flowers to the family in memory of Myrtle Mae Bryant, please visit our flower store.