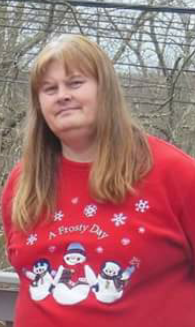 She was born on February 12, 1960, the daughter of the late Corene and Franklin Boyd Long.

She is preceded in death by her parents and grandmother, Lucille Pendergraft.

Surviving family include her companion of 17 years, Cecil Hollars and their daughter Krista Hollars of Whitley City, son: Randall Pendergraft, of Bradfordsville, Kentucky, special aunt Sue Pendergrass of Whitley City and special cousin Peggy Hill of Mt. Vernon, Kentucky whom she grew up with and they and were like sisters, special aunt Lucy Weston, Nabb, IN., brother: Gary Long and his wife Jessica of Willisburg, Kentucky, Step-sisters: Chris and husband Armon Portwood of Georgetown, Kentucky, Jodi and Larry Salmons of Corinth, Kentucky, special neice: Courtnei Long of Willisburg, Special friends: Alan and Mary Hollars of Whitley City, along with numerous cousins,

Sheila was a member of Bradfordsville Christian Church and a home maker who loved spending time with her family, camping, going to yard sales and shopping.

Funeral services will be held at 1:00 p.m., Saturday, February 11, 2017, in the chapel of McCreary County Funeral Home with Bro. Ervin Foster officiating.  Serving as pallbearers are: Cody Gibson, Ty Gibson, Daniel Phillips, Gary Long, Michael Murphy, Alan Hollars and Aaron King. Family will receive friends from 11:00 am until time for funeral services.  She will be laid to rest at the Higginbotham Cemetery.

To order memorial trees or send flowers to the family in memory of Sheila Jean Pendergraft, please visit our flower store.