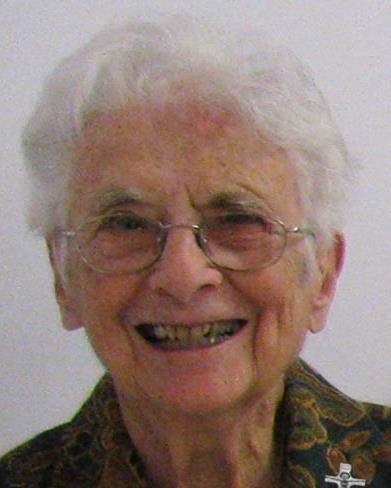 Sister Nancy Sutton (Sister Mary Terence), a member of the Sisters of St. Joseph of Chambéry, passed away on January 24, 2021, at Monsignor Bojnowski Manor in New Britain. Born on October 15, 1930, of the late Charles Edward and Florence Catherine (Quinn) Sutton, Sister Nancy entered the Sisters of St. Joseph on September 8, 1949, celebrating her Profession of Vows on August 24, 1955. At the time of her death, she was 90 years of age and in her 72nd year of Religious Life. Sister Nancy earned a Bachelor of Science Degree from Diocesan Sisters College, West Hartford, and a Master of Science from Villanova University, Villanova, PA. Her studies also included advanced work in Administration/Supervision at Fairfield University in Fairfield, CT. Sister spent several years teaching at various Catholic schools in all three Connecticut Dioceses before being named principal at St. Francis Xavier school in Waterbury. While at St. Francis Xavier, Sister Nancy accepted an invitation to be the Waterbury Federal Funding Committee of Administrators Association's chairperson. Responding to an inner call to immerse herself in direct ministry with the poor, Sister Nancy moved to Whitley City, Kentucky, in 1974 and helped create a new Sisters of St. Joseph mission, one that continues today at the hands of capable laypeople. Along with other community members who were teachers and nurses (affectionately named the 'Catholic Ladies'), Sister Nancy helped establish Good Shepherd Chapel for local parishioners. Also created were a food pantry and a secondhand clothing store in an offshoot room of the Chapel known as 'Lord and Taylor's' (named for the Chapel and the last name of the woman who ran the store). Eventually, a healthcare clinic became part of the Good Shepherd endeavor. Many trips navigated through the 'hollers' of the McCreary County to serve neighbors who found it difficult to get to the clinic. Sister Nancy taught courses at McCreary County College and started GED classes in a room in the convent for McCreary County's families. Well-respected as an innovative educator, she eventually invited to be a Board Member of the Mental Health Association of Lake Cumberland, KY, the Christian Care Center, and the McCreary County Housing Development. In 1985, Sister Nancy was the recipient of the Peace and Justice Award of Louisville, KY. Always one to champion the others' needs, Sister Nancy called upon friends in Darien, CT, and in other parts of the country on her 'mission days up north' to raise awareness and funds for those whose homes needed repairs or a complete overhaul. Over the years, with funds and large groups of summer adult, high school, and college volunteers, Sister Nancy and her crew built more than 38 houses in the County, keeping new owners supplied with whatever was needed to make a house into a real family home. As of her passing, two more homes are in different construction stages, a testament to the mission she instilled in others to serve the least among them. Christmas at Good Shepherd Chapel was a well-loved event in the parish, with children receiving new clothes and toys provided by local parishioners, other parishes, and volunteers. A dedicated missionary at heart, her love for all returned to her through the good wishes expressed by her students, friends, and parishioners as she left Good Shepherd. Sister Nancy's generosity of time, energy, and spirit were hallmarks of her mission. While leaving Whitley City was not her choice, her health began to challenge her boundless energy and she realized it was time to let others take over the mission. She returned to the Provincial House in West Hartford, never relinquishing her need to keep up with her many Kentucky friends. Her keen mind and quick wit served her well as she engaged in intense card playing with her religious sisters. A contagious laugh belied her presence wherever she was. The Sisters of St. Joseph would like to thank the administration and staff at Monsignor Bojnowski Manor for their kind and compassionate care given to Sister Nancy in her declining years. In addition to her Sisters in Community, Sister Nancy is survived by her sister and brother-in-law, Mary M. and Vincent M. Cunningham, a niece, Kelly Spangler and her family of Maine, and her nephew, Mark Cunningham and his family. She is predeceased by her brother, Charles Quinn Sutton, her twin baby sisters, and a nephew, Kevin Sutton. Due to the current COVID-19 health conditions and restrictions, a simple graveside service will take place Thursday, January 28, at the Sisters of St. Joseph Cemetery in West Hartford. Mask-wearing and social distancing will be maintained. The celebration of Sister Nancy Sutton's life will take place at a later date. In lieu of flowers, we ask that you consider a memorial donation to the Sisters of St. Joseph, c/o Office of Mission Advancement, 650 Willard Avenue, Newington, CT 06111. Fisette-Batzner Funeral Home, 20 Bonair Avenue, Newington, has care of the arrangements.

To order memorial trees or send flowers to the family in memory of Sister Nancy Sutton, please visit our flower store.