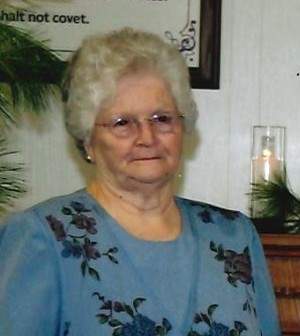 Thelma Marie Lyons, age 92 years, of the Wiborg Community, widow of James Lyons, passed away Friday, February 18, 2022 at her home.

She was born in Alpine, Kentucky on February 1, 1930 the daughter of Elmer and Florence (Souleyrette) Bolin. Thelma had worked as a cook at the McCreary Central High School, was a member of the Marshes Siding Church of God and enjoyed working in her flower garden.

Funeral services will be held 6pm Saturday, February 26, 2022 at 6pm in the McCreary County Funeral Home with Bro. Harry Watters officiating. The family will receive friends after 4pm at the Funeral Home. Burial will be in the Neely’s Creek Cemetery.

To order memorial trees or send flowers to the family in memory of Thelma Marie Lyons, please visit our flower store.