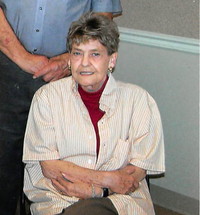 She was born in Wolfe Creek, Kentucky on April 24, 1936 the daughter of the late Joe and Ruthie (New) Jones.  She worked many jobs throughout her life; her last job was a receptionist for the Forest Service.  She enjoyed fishing, camping, sewing and working in her garden.  She was of the Baptist Faith.

Her parents; brothers, Cordes Jones, Robert Jones, and Louie Jones, and one sister Susie Matthews Roberts precede her in death.

To order memorial trees or send flowers to the family in memory of VIOLA THELMA JONES, please visit our flower store.